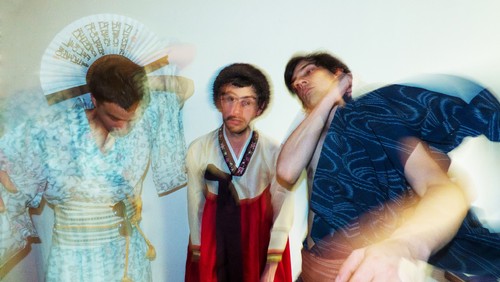 In January 1958, a UFO was sighted flying over an island off the coast of Trinidad. This reported event triggered Caandides imagination.

After having narrowed their focus of research by calculating the geographical coordinates of the island, Caandides wrote and played and dreamt of encounters of the third kind in a tropical setting. This record was born of a desire for travel, in which the very idea of wanderlust was to be explored.

Every expedition needs preparation. For this one, Caandides equipped themselves with samples of their own work, various cut-ups and treated guitars, among which voices freely mutate. The aim of the band in this expedition was to find a hybrid sonic material, between organic and synthetic, in which textures substitute one another: a bass becomes a drum machine, a voice becomes a synthesizer. Rubber guitars, wailing organs and proto-digital voices tangle and weave the phonic matter of the record, of which each new listen offers a new element, a new path.

With a few familiar faces at their side (Adrien Pallot, Lucas Valero, Morgane Colas), the band described twelve imaginary memories, twelve mutant folk songs, a sort of sound-track for a synthetic giallo.

The ambiguous cover art is based on a photograph of a UFO taken by a tourist, digitalized and colorized by graphic designers Zeugl.

Caandides already released two EPs (Before The Art in 2012 spotted by FatCat Records and Winter in 2013).